I’m sure you’ve heard the adage, “Write what you know.”

Yes.  Do that.  Plus, sprinkle in spicy little bits of your imagination.  It’s what adds flavor to the whole story you’re crafting.  It’s what makes your ‘voice‘ as a Writer stand out.  It’s part of who you are, what goes on inside your head, what you choose to share with the world.  As Readers get to know the worlds and the characters you generate, they also get to know you.  It’s a weird sort of relationship, yet it’s just another way for you to develop a large group of friends.  …  So, there’s the high-level analysis.

Now let’s talk about practical application.  How do you meld your imagination with the real world you see?  Let me set it in the context of an example.

Last weekend, we helped a couple we know unload a mutual friend’s personal belongings into their home.  Afterwards, we all shared a meal and conversation.  Tom, the homeowner, asked if any of us wanted to come along with him while he inspected a beehive, one of half-a-dozen he’s cultivating.  Quite a few hands went up and he set off with an entourage of six bee groupies.

He got the tools and protective garments from his garage, then ushered us to the edge of his property.  We traipsed down an embankment, through the woods on a cart trail, and into a clearing at the top of another rise.  In the midst of a field of new-growth clover sat the beehive.  It rose above the wildflowers and weeds upon a firm foundation of cinder-blocks.  It comprised three levels of boxes, plus a flat tin roof over a feeder tray.  The whole structure was painted in a pale lavender.  As he dismantled the hive, one level at a time, Tom expounded on all things bees.

He told us of the first few attempts to get colonies started, and how they failed.  He talked about his sources for queens and drones, as well as the ‘crap shoot’ odds of getting either a docile or aggressive batch.  When he removed the tin top, he pointed out the feeding tray of sugar water directly beneath.  His observation was that if the local plant life (clover, wildflowers, flowering trees) did well, then the bees “ate steak and potatoes,” instead of using the feeder tray for “basic bread and water.” 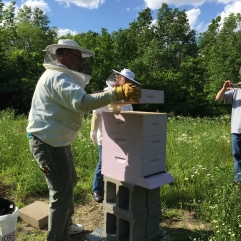 He took off the top level and showed us the slats of honeycombs dangling in the next box down.  Slowly, carefully, he worked a flat metal hook tool under a support and pulled out the center comb structure.  He noted there were only a few bees “this high up” and examined the extent of their work.  There were two different types of honeycomb visible: wax capped and uncapped.  Depending on the needs of the hive and its population, he said, there could be workers, drones, or honey under the waxy caps.  The uncapped cells could contain pollen or honey, that might later be capped for storage.  After checking the whole first level of combs, he removed the box and showed us the middle box.

This one was swarming with bees, laden almost completely to the edges.  He took out each comb frame and hung it from a set of hangers he attached to the side of the box.  As he removed the frames, Tom pointed out more of the bees’ work and how they filled the comb.  He kept looking for the queen, suspecting her to be in this more lively center box, but didn’t spot her.

He told us she would have a much larger end (for all that child-bearing), but with so many workers crawling around she could be easy to miss.  One of the things he reiterated was that this particular group was very docile, whereas his other hives held more aggressive bees.  Therefore, we were able to stand near this hive without protection, “but don’t swat at any of them, or they’ll swarm to protect themselves.”  Good to know.

Okay, so why did I share this little vignette with you?

Any real-life activity you participate in can be a source of information for a story.

I could easily use Tom as a template for a character in a story.  I could describe his rugged unshaven appearance, and contrast it with his easy-going conversation and gentle treatment of the bees he oversees.  Tom’s mannerisms could be used for either a main character or supporting character.  His features could be used ‘as is‘ or I could blend parts of him with someone else I’ve observed before.  The types of actions Tom performed don’t necessarily have to be locked onto beekeeping; the movements could be similar in diffusing a bomb.

What about the physical environment?  I could use Tom’s home (with a little embellishment) to portray a more secluded reclusive place.  Could a “retired” CIA agent tormented by his past be holed up there, trying to keep his distance from the world?  Is it the setting for a slasher movie style story?  Or will it be an idyllic homestead nestled atop the Alps with an overwhelming panoramic view that takes your breath away, just from the description?  Couldn’t I do a little more research on the types of trees and other flora to add into an existing story, to add color and texture and scents?  The wildlife could be teeming or timorous.  The setting could convey the beauty of nature, or I could show how a landfill has encroached to despoil it.

Consider the behaviors of the bees as a template for another creature in a story.  Do humans in the future live in clustered isolated communal structures?  (Think “Wool” by Hugh Howey.)  Do the aliens of Planet Mellifera attack only when provoked, doing so by swarming one individual at a time until all enemies are annihilated?  (Okay, I keeping replaying “Starship Troopers” in my mind.  Ugh!)  What about a distinction between “steak and potatoes” versus “bread and water.”  How could that idea play out for an inner city kid with no prospects?  For a marooned sailor?  For an astronaut left behind by accident?  (You’ve read “The Martian” by Andy Weir, right?)

Now do you see why I went the long circuitous route to get you here?  There’s so much out there!  So much to experience personally.  So many people with so many stories of things that have happened to them.  I only hope you’ll take the time to observe, to really see the world around you with both eyes open, to take big epicurean bites and savor the flavor, to listen to its low-grade background noises and boisterous conversations, to catch a faint hint of perfume from the girl you love as she passes out of your reach, to feel the fine grit of salt spray splashed upon your face among the surging breakers of the bay.

All these things are waiting for you to learn of them, to spend time getting to know them, and honor them with a place in your stories.  It will please them to put in a cameo performance, and you will be blessed with a richer more vibrant tale to tell your Readers.

This site uses Akismet to reduce spam. Learn how your comment data is processed.